The Department for Communities and Local Government recently issued a myth busting document because, they say, "a number of myths surround the funding of faith-bases bodies to deliver publicly funded services and can obstruct the fair access of such bodies to public funding and tendering opportunities as part of the third sector.

As well as reassuring for those faith based organisations running projects it is a useful document to put before critics and obstructionists.

The document is downloadable at www.communities.gov.uk/documents/communities/pdf/15073411.pdf
Posted by PEN Co-ordinator at 18:02

This is the title on the press release sent out by South Asian Concern on publication of their survey results. The text continues...

Imigration was one of the key issues raised in this month's dramatic General Election. Its impact on British society has been significant, from food and fashion to business and politics. But what about the Church?

While some churches have been revitalised and new ones formed through the presence of ethnic minorities in their local areas, this does not generally apply to South Asians. The vast majority of the 2 million plus South Asisans in the UK regard the Church and Christianity as irrelvant to them*

How is the UK Church responding? Is it foing anything at all? This is what charity South Asian Concern, hoped to discover through its recent survey.

South Asian Concern will use the information from the survey to help churches reach out to South Asians. Ram Gidoomal, SAC Chairman, says "We have the opportunity to engage with the unreached here in out midst and - for some of us - at our doorstep!"

The survey confirms that while some churches are engaging with South Asians in a variety of ways, from Girls' Brigade to Bollywood nights, others are struggling to make inroads in their local South Asian communities.

A lask of understanding of Asian culture, apathy and a lack of resources were reasons given by churches for not being involved in specific outreach to South Asians. Cultural issues that hindered engagement included the common perception among South Asians that Christianity is the same as Western culture, the place of religion in South Asian identity, as well as family and community pressures.

But some churches are overcoming these challenges and seeing fruit. The importance of prayer was evident in the survey, both in motivating churches to reach out and in creating opportunitites. Churches involved in outreach to South Asians were more likely to pray for them. Those not involved were less likely to pray.

Taking time to build realtionships were also key. Visiting people at home was more common amongst churches actively engaging with South Asians than holding English classes or youth clubs. Relationships could help people make the transition from bridge building activities, like parent and toddler groups, to deeper engagement with the church, such as attending worship services and exploring the claims of Christ.

For the survey report including all the data from the returned surveys, please contact South Asian Concern: info@southasianconcer.org Also visit their website www.southasianconcern.org

*There are an estimated 75,000 Christians of South Asian origns in the UK, less than 4% of the total South Asian population.
Posted by PEN Co-ordinator at 16:52

Presence and Engagement in a Multi Faith World

The Course includes visits in Leicester and to the Islamic Foundation, Markfield.

The cost, including lunch and refreshments is £120 or £156 resident with local clergy (other accomodation at nearby hotel can be arranged by the centre). Contact admin@stphilipscentre.co.uk 0116 273 3459 for bookings and more details.

InSpiRe:The Centre for Initiatives in Spirituality and Reconciliation

The conference will explore the promise of spirituality in the service of reconciliation with special reference to contemporary issues. It will be a forum for those working in these areas and provide an opportunity for scholarly interchange.

For costs and booking contact InSpiRe Administrator, Dr Stephen Bullivant inspire@smuc.ac.uk and for more on the centre see www.smuc.ac.uk/inspire
Posted by PEN Co-ordinator at 18:59

Interfaith Encounter From An Evangelical Perspective

Thursday 8th July at St Ethelburgas's Centre for Reconciliation and Peace 78 Bishopsgate, London EC2N 4AG
A stunning line up of speakers contribute to this day long (9.30 - 16.15) event which seeks to

This event is being held in connection with Edinburgh 2010 a multi-denominatioal and international project set up to commemorate the 1910 World Missionary Conference. The centenary Conference takes place in Edinburgh 2 - 6 June. The St Ethelburga's event is part of the 2010.global initiative.

St Augustine's Church
117 Queen's Gate
London SW7 5LW
The speaker, Giles Goddard, is vicar of St John's Church Waterloo and chair of Inclusive Church. His overriding hope is that the gospel of God's generous welcome through Jesus can be heard loud and clear in London. He has written "Space for Grace - Creating Inclusive Churches" about his experience in an inner city parish near the Elephant and Castle. He formerly worked for housing associations, and he believes that faith should be lived out not just through church but through social action, living for justice, arts and politics.
6.30pm for 7.45pm. Entrance is £7 including supper
This is a Nested event. Contact Julian Whiting, Events Director, for more information julian@nested.org.uk 07899 723620
Posted by PEN Co-ordinator at 18:14

Labels: Caring for One Another

Saturday 12th June 10.30am - 12.30 and lunch
What theological assumptions lie behind the different ways Anglican parishes order and maintain their buildings? How does the Holy - sacred, the numinous - relate to mission and community engagement? How do theology and the pastoral, liturgical, management and financial realities of parish experience bear on each other?

will be followed by an overview of how church buildings have been adapted for community use in the Borough of Newham.

Common theological threads will be drawn from the ensuing discussion and may form the basis of future related events. Although the presenters are clergy it is hoped that lay people will also attend and contribute.

The event is free as part of St Barnabas' patronal celebrations.
Please contact James Ramsay ramsay.jas@gmail.com for further details or to express interest in attending (this will ensure adequate catering)

Labels: Caring for One Another, Praying and Worshipping, Working for Justice

Sorry, this event has had to be cancelled due to insufficient take up. 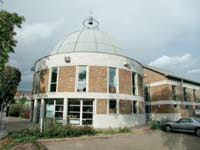 For over ten years the London Inter Faith Centre has offered a two year certificate in inter faith relations. On Tuesday 8th June there is an opportunity to

To ensure there are enough refreshments to go around plese email Joe on info@londoninterfaith.org.uk if you are planning to attend.

The centre is at 125 Salusbury Road, London NW6 6RG

The One with the Rabbi, Priest and Imam(chaired by an Agnostic) .......

King's College London's Denmark Hill Chaplaincy presents Difference and Damnation:Why We Do NOT believe the Others are Bound for Hell.

Churches involved in Citizens UK had an eventful General Election - working with mosques, synagogues and temples to advance a broad-based agenda of social and economic issues.  The alliance held a 2500-person assembly with the three main party leaders just days before the election.

The Jellicoe Blog contains video footage of the assembly - and ongoing coverage on the long-term work of holding the politicians to their promises.  There will be opportunities to reflect on the engagement of churches in citizen organising at two forthcoming talks.  Dr Luke Bretherton (who negotiated with David Cameron at the assembly) will give a lecture at Heythrop College on 20th May, while Revd Angus Ritchie (who presented the case for a Living Wage to Gordon Brown) will lead a seminar at the Royal Foundation of St Katharine on 21 June.
Posted by Admin at 21:02

‘Workplace chaplaincy’ is the term that covers the church’s outreach to the economy. Today, it takes many forms and is supported by many local ecumenical partnerships. Chaplains can be found in supermarkets, at airports, in industry, among glittering tower blocks in business districts.

Malcolm Torry tells the stories of the movement’s origins, starting with the first record of priests in a place of work – on board naval ships in the reign of Henry VIII. He traces the established church’s often tenuous relationship with the working classes and the profound changes in that relationship that occurred during World War 1 and 2, the subsequent growth of industrial mission, and today’s challenge of an increasingly secularized society.

Published in partnership with the Industrial Mission Association, this is a theological handbook for all involved in contemporary mission among people at work, or in any way concerned about how faith impacts on the economy, workplace ethics, unemployment, recession and other key issues affecting peoples’ lives today.
Posted by Admin at 14:09